Insurance Extra extends insurance cover for treatment expenses, including those for COVID-19

We use cookies on this site. By browsing it, you express your consent to their use. You can restrict cookies and learn what they do in your browser tools or following the instruction provided HERE. Some features of this site may not be available after disabling cookies. For more information on personal data protection, click HERE.

The eternal city. Caput mundi of men and God. Rome. Born of myths and legends. What are you waiting for? Take a holiday in Rome just like Audrey Hepburn. This city is cosmopolitan yet distinctive. Historical yet modern. 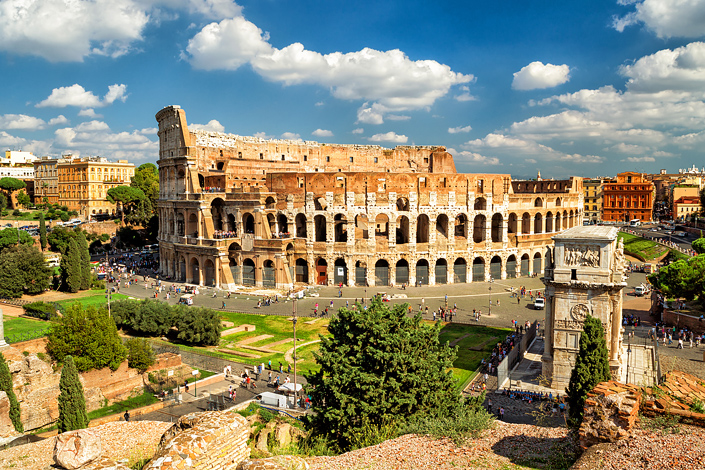 Rome was founded more than 7,200 years ago, and has been settled ever since. The legend of the she-wolf that nursed the?twins Romulus and Remus appears in practically every history textbook in the world.

To go to Rome and not see the Coliseum? Impossible. The?Coliseum (Colosseo in Italian) is the symbol of Rome in virtually any tourist leaflet. At the time of its construction, the?most famous structure was called the Amphitheatrum Flavium, after its founders, but standing right next to it was a?colossal statue of Nero – naturally called the Colossus. The?epigram written in Latin states: As long as the Colossus stands, so shall Rome; when the?Colossus falls, Rome shall fall; when Rome falls, so falls the?world. The statue of Nero fell in 1000 and the name of Colosseum started to be used for the?amphitheatre. This too is a?way to save the world.

Millions of visitors come to the Coliseum every year. It is the largest arena ever built in the Roman Empire. Even the Catholic Church has adopted it as its “own”. Every year on Good Friday, the Pope leads a Via Crucis procession to the amphitheatre. Crosses are firmly affixed in the arena in the location of the former emperor’s box. This was where life and death decisions about the?injured were made. Thumb down versus thumb up. The second gesture gave a chance of life.

Tens of thousands of people and animals died at the amphitheatre. Now it is the symbol of the fight against the death penalty, which was abolished in Italy in 1948. Whenever a country abolishes capital punishment, the night lighting of the monument changes from white to gold. The same happens if somebody is released from death row.

Right next to the colossal arena is the Roman Forum, the centre of political, business, justice and social life in the ancient metropolis. The concentration of lawyers, bankers, politicians and prostitutes was allegedly so high that people used to walk through the forum in lines.

Those who couldn’t afford fancy residences lived in rental houses. At?the?time, no house had a toilet. This is why public latrines were built, which were not separated from one another. This is where Romans discussed all types of issues, and a number of marriages were even arranged here.

If you happen to be in Rome on 9 March, you will notice Romans doing their best to park their car right next to the forum, in order to have it blessed by the?patron of motorists Santa Francesca Romana.

The Temple of Jupiter used to stand on the summit of Capitoline (a hill above the Roman Forum). This is where the most sacred rituals were held, and why it earned the name Caput Mundi (head of the world). This was later expanded to all of Rome. According to historians, the word “capital” for the chief city originates from this fact. ?

Right across from it is Trajan’s Market, originally a monumental structure that is often called the first supermarket in the world.

Do you want to know the truth? Then you have to try another Roman attractive – the Bocca della Verita (Mouth of Truth), located in front of?the?church of Santa Maria in the Cosmedin. You will have to wait in line for your turn however.

It is impossible to name all the monuments in Rome, but you cannot miss the?Spanish Steps or the famous Trevi Fountain. However, it is prohibited to step into its waters like Anita Akberg did in Fellini’s film La Dolce Vita. Make sure you visit the Roman Pantheon. This ancient Roman temple (originally of all the gods) has stood here for almost two thousand years. Its giant dome is a?unique feat of architecture. Pumice was added to the concrete to keep it from being too heavy.

Take a walk across Rome’s most famous bridge over the Tiber – the Angel Bridge, for instance when approaching the Castel Sant'Angelo.?It was originally a mausoleum and later a papal residence with a prison. Today, it houses a museum dedicated to the history of Rome.

How could you go to Rome without visiting the Vatican? The country within a?country is right next to the Castel Sant’Angelo. About one thousand people live in the Vatican and following the last census, the headline of the local newspaper read: Population increases by 15. Nevertheless, it is a place with a?huge concentration of people per square meter. Hordes head to the Vatican, especially to St. Peter’s Cathedral – Catholics, people of other faiths and complete atheists alike.?

St. Peter’s Cathedral (San Pietro) stands above the place where Saint Peter was buried. Originally, a basilica stood above his grave, but a cathedral started being built in the 16th Century. When you enter the dome, the?colonnade in front of the church spreads before you. Standing in?the?middle of it is an Egyptian obelisk from the 13th Century BC. If you love the?fine arts, be sure to visit the Vatican Museum, but expect to have sore feet by the end.

Since the 16th Century, the Vatican and Pope have been protected by the?Swiss Guard. However, they are not particularly interested in tourists, which is apparently why the Vatican has such high criminality. There are a?vast number of pickpockets among the crowds. Converted to capita, criminality here is about 20 times higher than in surrounding Italy. Millions of tourists on a small area… an absurd tax to spirituality.

What to do in Rome

On foot and by metro

The most convenient way to travel between individual sights in Rome is via metro. There are only two lines, because boring tunnels under the ground which is filled with history is a superhuman task. And don’t forget: unlike other continental underground systems, the trains here run on the left.

There is one more thing you need to keep in mind in Italy’s capital. Evil tongues like to repeat that there are only two types of pedestrians in Rome. The fast ones and the dead ones. So just in case.

Not just history, but also music and film

When live music, then jazz. The oldest jazz club in the city is the?Alexanderplatz Jazz Club in Via Ostia.?This small underground venue with an intimate atmosphere hosts stellar musicians from Italy and beyond. After dark, the locals head for a good time to the floating Baja Bar. The?striking building looks like an Art Nouveau pavilion. Baja is a place to listen and dance – in short, it’s authentic.

Film fans have also been coming to Rome for a decade to attend the autumn Rome Film Festival. 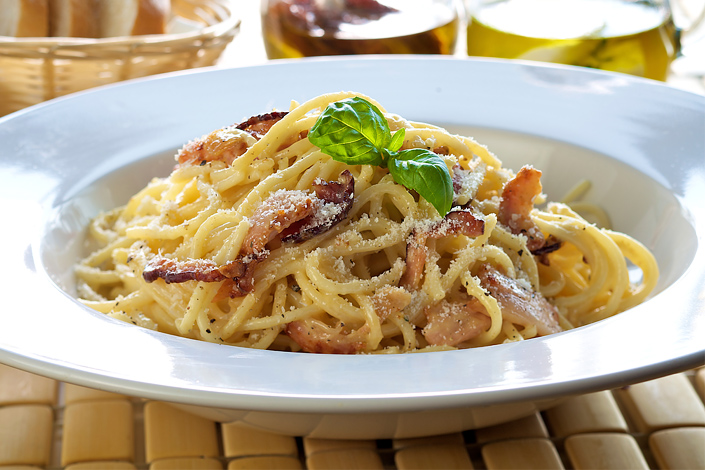 Italian cuisine is known all around the world, but Roman cuisine is not quite so famous. Local specialities include, for instance, artichokes (carciofi) marinated in olive oil and herbs, spaghetti carbonara (indeed, this dish is from Rome), or tripe with sheep’s cheese (pecorino romano). Local merchants offer roasted chestnuts on the street (all year round). And then there is the?coffee and ice cream: find frozen treats at the acclaimed gelato shop near the Pantheon – they have 150 kinds!

No matter what you order, you can’t go wrong in Rome. Italian cuisine is not just tasty, it’s also healthy. And don’t forget: the?basis is the “dolce far niente” – sweet nothing doing. 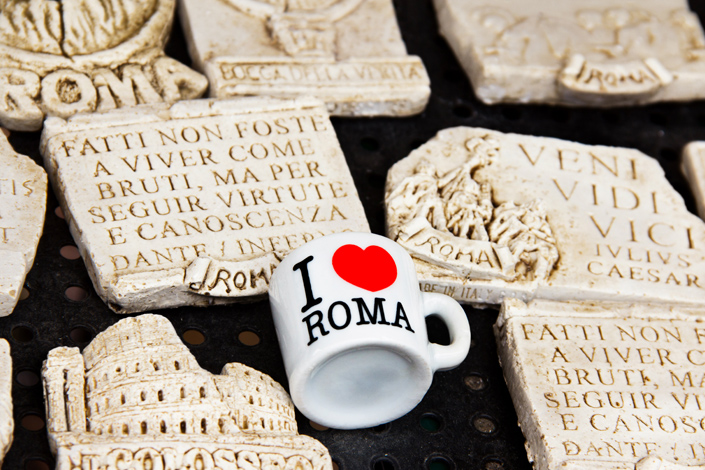 Take a stroll through lanes overflowing with diverse shops and stands with no lack of temptations for spendy visitors. The charm of trinkets and alternative art is definitely here, as are a few true masterpieces from talented but utterly poor artists. Who knows, maybe a future Pablo Picasso, Henri de Toulouse Lautrec or Vincent van Gogh is selling his works here.

Equally popular are museum shops, where you can buy quality replicas of historical artefacts. Fashion galleries and boutiques of globally renowned designers line the streets around the Spanish Steps.

Are you tired? Head out of town a few miles. The beach by the?sea is not far away. Incidentally, it was here that the Roman emperors came to relax. From here, it’s not much further to the?Pope’s summer residence in Castel Gandolfo.?

Leonardo da Vinci – Fiumicino airport is about 32km from Rome.

The station is located directly at the airport, by the departure and arrival halls. Tickets are available for purchase online or on-site at authorised selling points.

TAXI stands are located by Terminal 1 and 3 exits.
Transfers to/from the airport can be booked at: www.oktransfer.cz or directly on our website.

Short-term and long-term parking options are available around airport. Parking at great prices can be booked at: www.okparking.cz or directly on our website.

Reserve a car in advance to save time and more.

You can check-in for Czech Airlines-operated flights from Rome in one of the following ways:

Travelling with carry-on baggage only?

If you travel with carry-on baggage only, have checked-in online and have your boarding pass either printed or saved in your mobile phone, you can proceed directly to your departure gate.

If you travel with checked baggage and have checked-in online, please drop your baggage off at the “BAGGAGE DROP-OFF” assigned desk.